On September 21, the Red Cross plans to launch a single website where qualified households from 39 Texas counties that were severely impacted by Harvey can apply for $400. We expect the website to have sufficient capacity to handle all registrations; applications will not be accepted through any other website or phone number. The Red Cross is processing registrations for pending applicants whose registrations were not completed when the system became overloaded. For example, because of the system overload, some applicants did not receive reference codes or were unable to select payment methods. We are working to resolve those registrations within the next few days. Qualified applicants will receive a text or email with instructions for completing the process. 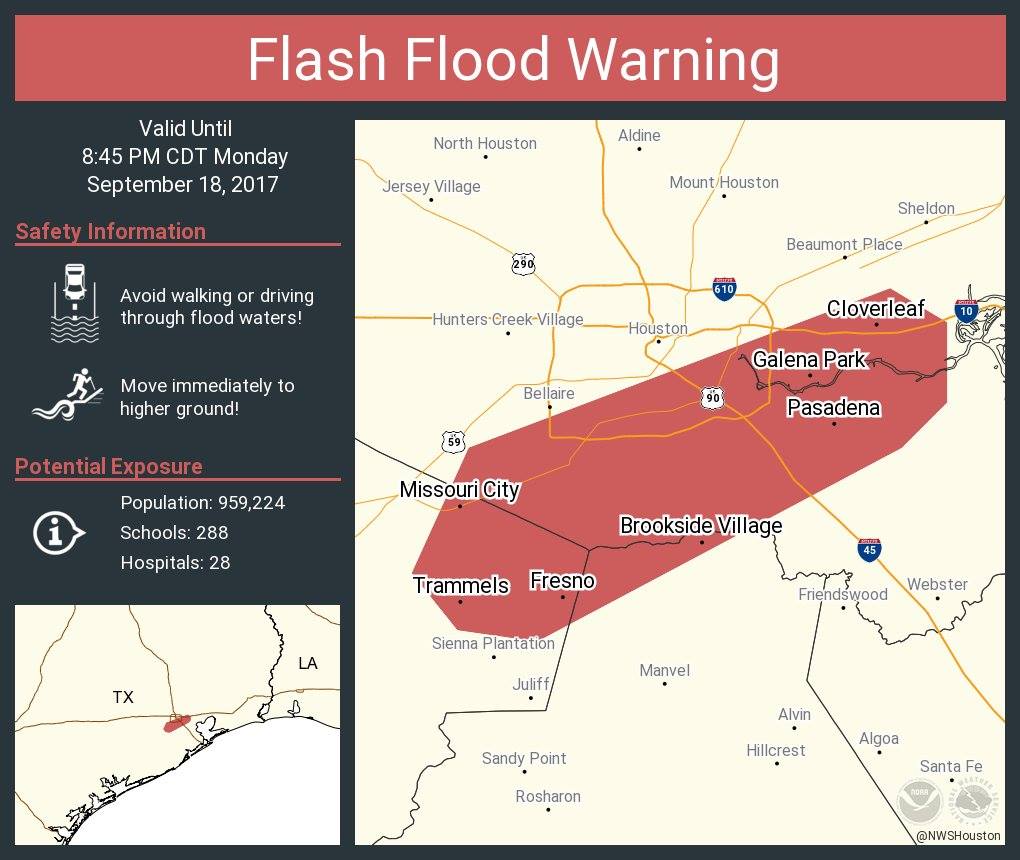 Federally regulated Fannie Mae and Freddie Mac have come together to get the word out about mortgage relief options for those affected by natural disasters, including Hurricanes Harvey and Irma. Our goal is to make sure you have time to focus on your safety. Here is what you need to do to get help.

What help is available?

If you are affected by the recent hurricanes, you are eligible to temporarily stop making your monthly mortgage payment for up to 12 months. At the end of this temporary payment break: 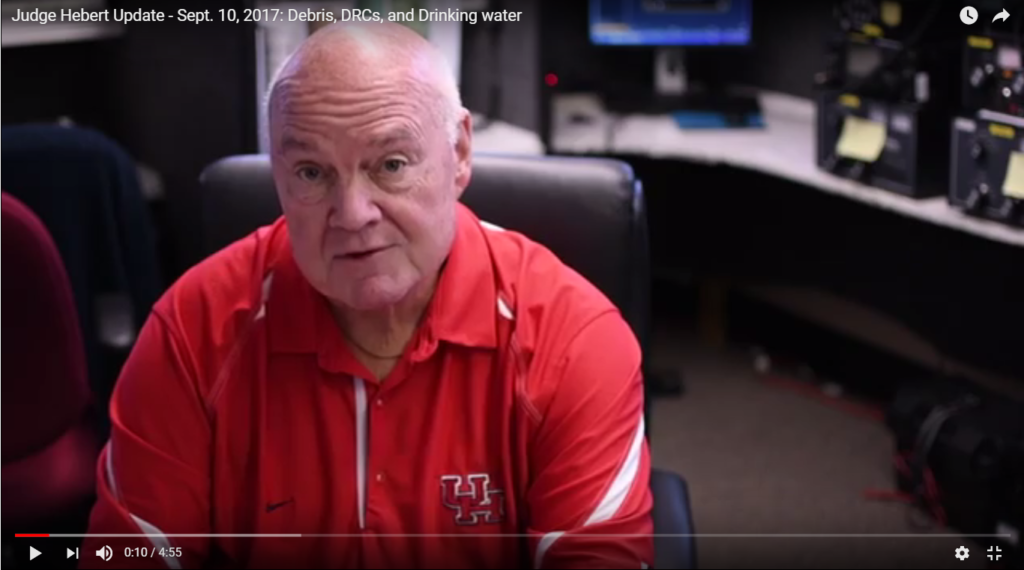 FORT BEND COUNTY, TEXAS — Fort Bend County Judge Robert Hebert has amended the debris permit with the Texas Commission on Environmental Quality (TCEQ) and has verbal approval from FEMA to allow the County to pick up bagged debris.

“We are sorry for any frustration this has caused our residents; we heard you and have negotiated with the TCEQ and FEMA for an amended permit and a simpler process. As of 1:45 pm today, we have approval to haul bagged debris.” says Judge Hebert, “If you have already bagged your debris, just leave it on the curb to be picked up. The crews today and tomorrow may not be able to get it since it requires different equipment to pick up bagged debris, but we will come by to pick it up later.” As before, place household trash in your regular bin for pickup, as we cannot take household trash to the debris disposal sites.

Debris removal equipment will cover the affected areas of the county several times over the coming weeks. If your neighborhood has not seen the debris trucks yet, you will soon. If you are not able to get your debris to the curb yet, the trucks will be by a few more times to pick it up and haul it away.

Remember that all debris has to be separated. The Fort Bend County Office of Emergency Management has information posted on their website about debris separation; residents should check this flyer to ensure their debris is properly sorted so it can be hauled away as quickly and cleanly as possible.

If you need assistance cleaning your house after the floods, call CrisisCleanup at 844-965-1386 to request a volunteer team to come help you. If you are able to help your neighbors with cleanup, the safest and most efficient way to get connected is through Volunteer Houston, or another cleanup organization you may already have a relationship with. More information about getting help with clean-up or volunteering to help others with clean-up can be found at http://FortBendRecovers.org.

In response to comments and questions regarding emergency orders issued by the City of Missouri City during Harvey, the following are the actions that took place in regard to the declaration of an emergency through Order O-17-01 and a subsequent Order O-17-02 providing for commandeering of certain private property for supplies.

On August 23, 2017, Governor Greg Abbott, due to the threat of imminent disaster posed by Tropical Depression Harvey, issued a proclamation declaring state of emergency in numerous counties which included Fort Bend and Harris Counties.  This proclamation authorized the use of all available resources of the state government and of political subdivisions that were reasonably necessary to cope with the disaster.  With the storm imminent, the City of Missouri City’s Emergency Operations Center was activated on August 25, 2017 at 7 p.m.  Subsequently, Mayor Allen Owen, per state statute, proclaimed by Order  O-17-01 a state of disaster in the interest of public health, safety, and welfare.  On August 28, Order O-17-02 was issued by Mayor Owen when he determined it was in the best interests of the citizens of Missouri City and the general public to commandeer, procure and use private property.  This declaration was issued pursuant to Section 418.1015 of the Texas Government Code, which provides,

“the presiding officer of the governing body of an incorporated city may, when a state of disaster has been declared, exercise the powers granted

to the governor under Chapter 418 of the Texas Government Code on an appropriate local scale; and whereas the Governor has the authority to

commandeer, procure or use private property if the Governor finds such to be necessary to cope with a disaster pursuant to Section 418.017 of

the Texas Government Code; and the mayor now finds and determines it to be in the best interests of the citizens of Missouri City and the general

public to commandeer, procure and use private property to cope with the effects of Hurricane Harvey.”

State law also provides that a person or business whose private property has been commandeered or used must be compensated. In accordance with the statute, the city kept records of the items acquired and is following up with vendors regarding the reimbursement for these items.

In an effort to provide timely, efficient service to Municipal Solid Waste Program customers in the wake of Hurricane Harvey, City management and WCA developed a collection plan to resume regular and recycling service for residents starting this Monday, Sept. 11 at 7 a.m.

“We are grateful to WCA officials for working with us to immediately provide solid waste to our citizens as the City recovers from Hurricane Harvey,” said City Manager Anthony J. Snipes. “This timely response aligns with our goal to consistently provide superior service to residents.”

The City is also partnering with Fort Bend County to provide residents with up-to-date information about storm debris pickup plans. The updated FAQs below address the most common solid waste questions being asked in the community.

Residents are asked to park vehicles away from solid waste pickup areas to assure trucks and crews have access to collect disposable materials.

Who will pick up my trash?
For residents receiving City service, WCA will resume regular, recycling, bulk and yard waste pickups this Monday, Sept. 11 at 7 a.m. Residents are reminded to bag all green waste, such as grass or leaves.

When will storm debris such as building materials and tree limbs be picked up and who is handling those collections?
Other waste resulting from Hurricane Harvey, such as construction, demolition debris and tree limbs, will be picked up in accordance with the Fort Bend County Office of Emergency Management debris management program. These materials should not be bagged. The county is scheduled to start this clean up over the weekend.

Will I receive a rebate or discount if WCA did not pick up my household trash, yard trimmings, and recyclable materials during or after the hurricane?
No. Pursuant to WCA’s contract with the City, if the company is unable to perform its duties because of an event out of its control, such as a hurricane or a tornado, WCA’s inability to perform must be excused during and after such event to provide crews with enough time to correct the adverse effect of the event.

Do I have to separate my trash for pick up?
Yes. Refer to the “Separating Your Debris” diagram above and on the homepage of the City’s website: www.missouricitytx.gov.

Stay in the loop by connecting with us on our social networks:
Facebook|Twitter