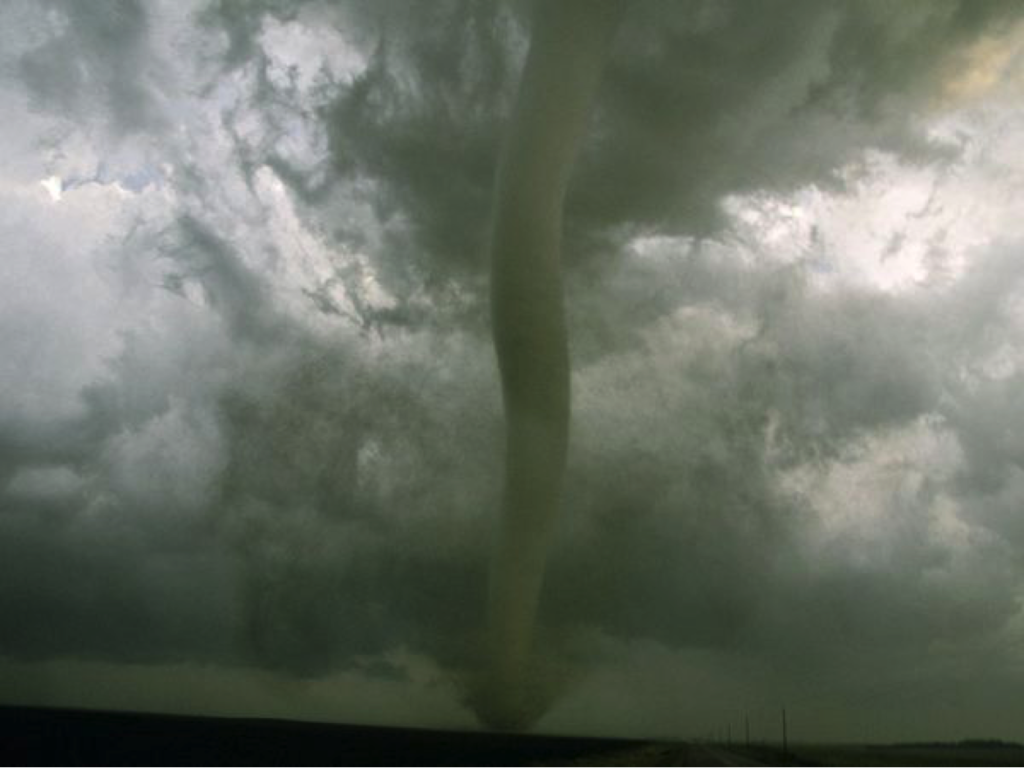 Tornadoes are vertical funnels of rapidly spinning air. Their winds may top 250 miles (400 kilometers) an hour and can clear-cut a pathway a mile (1.6 kilometers) wide and 50 miles (80 kilometers) long.

Twisters are born in thunderstorms and are often accompanied by hail. Giant, persistent thunderstorms called supercells spawn the most destructive tornadoes.

These violent storms occur around the world, but the United States is a major hotspot with about a thousand tornadoes every year. “Tornado Alley,” a region that includes eastern South Dakota, Nebraska, Kansas, Oklahoma, northern Texas, and eastern Colorado, is home to the most powerful and destructive of these storms. U.S. tornadoes cause 80 deaths and more than 1,500 injuries per year.

A tornado forms when changes in wind speed and direction create a horizontal spinning effect within a storm cell. This effect is then tipped vertical by rising air moving up through the thunderclouds.

The meteorological factors that drive tornadoes make them more likely at some times than at others. They occur more often in late afternoon, when thunderstorms are common, and are more prevalent in spring and summer. However, tornadoes can and do form at any time of the day and year.

Tornadoes’ distinctive funnel clouds are actually transparent. They become visible when water droplets pulled from a storm’s moist air condense or when dust and debris are taken up. Funnels typically grow about 660 feet (200 meters) wide.

People, cars, and even buildings may be hurled aloft by tornado-force winds—or simply blown away. Most injuries and deaths are caused by flying debris.

Tornado forecasters can’t provide the same kind of warning that hurricane watchers can, but they can do enough to save lives. Today the average warning time for a tornado alert is 13 minutes. Tornadoes can also be identified by warning signs that include a dark, greenish sky, large hail, and a powerful train-like roar.