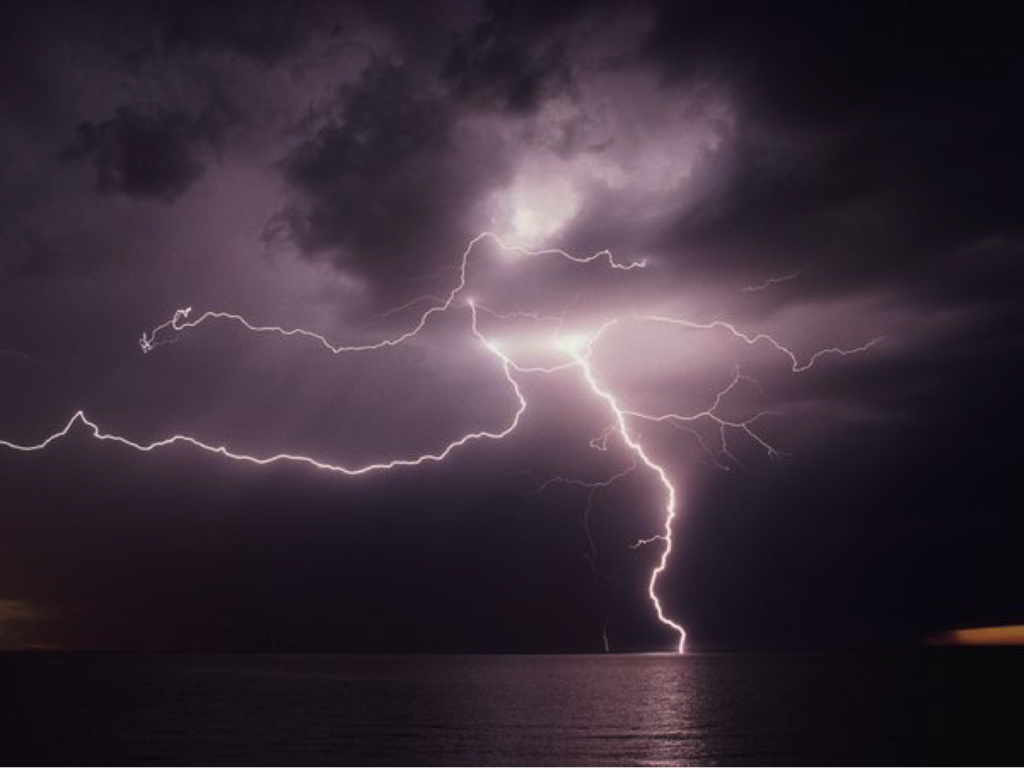 Cloud-to-ground lightning bolts are a common phenomenon—about 100 strike Earth’s surface every single second—yet their power is extraordinary. Each bolt can contain up to one billion volts of electricity.

This enormous electrical discharge is caused by an imbalance between positive and negative charges. During a storm, colliding particles of rain, ice, or snow increase this imbalance and often negatively charge the lower reaches of storm clouds. Objects on the ground, like steeples, trees, and the Earth itself, become positively charged—creating an imbalance that nature seeks to remedy by passing current between the two charges.

A step-like series of negative charges, called a stepped leader, works its way incrementally downward from the bottom of a storm cloud toward the Earth. Each of these segments is about 150 feet (46 meters) long. When the lowermost step comes within 150 feet (46 meters) of a positively charged object it is met by a climbing surge of positive electricity, called a streamer, which can rise up through a building, a tree, or even a person. The process forms a channel through which electricity is transferred as lightning.

Some types of lightning, including the most common types, never leave the clouds but travel between differently charged areas within or between clouds. Other rare forms can be sparked by extreme forest fires, volcanic eruptions, and snowstorms. Ball lightning, a small, charged sphere that floats, glows, and bounces along oblivious to the laws of gravity or physics, still puzzles scientists.

Lightning is extremely hot—a flash can heat the air around it to temperatures five times hotter than the sun’s surface. This heat causes surrounding air to rapidly expand and vibrate, which creates the pealing thunder we hear a short time after seeing a lightning flash.

Lightning is not only spectacular, it’s dangerous. About 2,000 people are killed worldwide by lightning each year. Hundreds more survive strikes but suffer from a variety of lasting symptoms, including memory loss, dizziness, weakness, numbness, and other life-altering ailments.